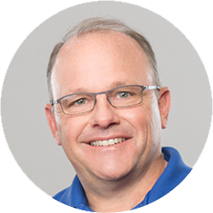 KEVIN PROGRAMMED HIS FIRST COMPUTER, an Ohio Scientific, in high school in 1979. The thrill of that experience started him down a path of continual discovery that he maintains to this day. A student of nearly everything in his life, Kevin believes strongly in the value of endless learning. He is constantly taking on projects around the house that begin with taking things apart that he may not be able to put back together. He often has a similar strategy with his golf swing.

Whether it’s alone or with friends, Kevin enjoys playing golf — something that he can never master. He is especially proud of his wife and two daughters and the laughter they share.

“I am most proud when I see my colleagues growing and enjoying life with each other, and when I hear that we have made life a little easier for our clients. It is my goal for Pharos to make a positive and lasting difference in the lives of everyone we touch. Anytime I see that promise being delivered it is a good day.”

[This is a snippet of a Pharos article featured in Entrepreneur]
In November 2018, people took to Twitter to post pictures of a bizarre message regarding a YouTube popularity contest. As it turned out, thousands of internet-connected printers across multiple countries had been hacked—each delivering the same unsolicited printout urging people to subscribe and spread the word about the YouTube competition.

The hacker who claimed responsibility for the stunt said he was trying to teach people a lesson about printer security. The incident showed just how easy it can be to penetrate a modern printer. Luckily, the hacker didn’t have anything more malicious in mind.

“By shifting IT burdens to cloud services (especially in areas such as printing, which is not commonly the domain of in-house expertise) IT teams can spend more time focusing on core business operations.”

Still, the hacker made a good point. For most people, printer security is an afterthought. These devices might be the most overlooked high-tech item in businesses today. The reality is that modern printers are powerful, network-connected devices that carry many of the same vulnerabilities and liabilities as any other network computer.

According to a report by IBM Security and Ponemon Institute, the total cost from security breaches rose by more than 6 percent between 2017 and 2018. And that figure reflects how, for many organizations, exposure of sensitive information can be catastrophic.

Companies waking up to this danger might rush to reinforce workstation and network security but overlook other connected devices, such as printers. By default, printers are typically set up for easy access and configuration on a corporate network. This default state may be convenient, but it also leaves printers vulnerable to outsiders—and not all hacks are harmless pranks.

A poorly secured printer can actually allow hackers to view documents, steal intellectual property or other sensitive information, print anything they like or inject malware—potentially leading to even worse consequences down the road.

Fortunately, there are ways to manage your organization’s printer security risks, and one of them might surprise you: relying on cloud services. Here are three ways cloud services can help improve your information security:

Read the full article at Entrepreneur.com >>

+ Secure Your Office Printing Via the Cloud

+ Manage Print to Drive Savings to Your Bottom Line

+ Has Your Company Secured These Attack Vectors?

+ Printers Must Be Part of a Strong Security Policy

You're one step closer to saving your organization a lot of money. Complete this simple form to start the conversation; we will be in touch within a few business days. Thank you!

Start here to make your office printing more secure, efficient, cost-effective, and sustainable.
Request a demo or a free trial of our software.
Prefer to speak to us now? Call 585 939 7000 ext. 2