NOTE ON OUR RESPONSE TO COVID-19

Has Your Company Secured These Overlooked Attack Vectors? 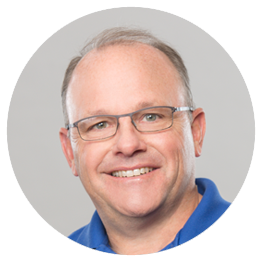 KEVIN PROGRAMMED HIS FIRST COMPUTER, an Ohio Scientific, in high school in 1979. The thrill of that experience started him down a path of continual discovery that he maintains to this day. A student of nearly everything in his life, Kevin believes strongly in the value of endless learning. He is constantly taking on projects around the house that begin with taking things apart that he may not be able to put back together. He often has a similar strategy with his golf swing.

Whether it’s alone or with friends, Kevin enjoys playing golf — something that he can never master. He is especially proud of his wife and two daughters and the laughter they share.

“I am most proud when I see my colleagues growing and enjoying life with each other, and when I hear that we have made life a little easier for our clients. It is my goal for Pharos to make a positive and lasting difference in the lives of everyone we touch. Anytime I see that promise being delivered it is a good day.”

If you’re a business leader, you’ve heard, read or thought about it more than you probably want to: the ceaseless war to protect your company’s network and data from a hacker underworld that’s increasingly sophisticated and ambitious.

Major breaches are a PR nightmare that no company wants to experience. Recall when ride-sharing giant Uber belatedly announced it had suffered a breach that exposed the personal information of 57 million people. Of those affected, 25 million lived in the United States, and more than 4 million were Uber drivers. In this case, the hacker agreed to destroy the data in exchange for a “bug bounty” payment from Uber, which was far less than the cost of the damage to the brand when details surrounding its mishandling of the breach were revealed.

Are your office printers and documents secure? We can help.

If the hacker had more malicious intentions than monetary gain, there’s no telling how bad it might have been for Uber. Most companies that suffer such breaches aren’t as lucky. When hackers hold data for ransom, their threats are usually for real. Just ask victims of the WannaCry virus or Sony hacks, which forced several major companies to lose time, money, credibility and irreplaceable data when they refused to give in to the hackers.

Businesses today must understand how hackers operate and stay on top of the ever-evolving threats in our digital world.

3 security vectors you may not have considered

Security breaches often occur where we least expect them, and many areas still fly under the radar. Here are three lesser-known attack vectors and ways to mitigate the risk they pose to your company.

1. Lock down your office printers and secure your documents.

You might not consider your office printers a serious security threat, but several recent incidents have called attention to the fact that modern printers are more than just paper pushers. They’re sophisticated network computers, which means they deserve the same levels of security attention and protection as servers and employee workstations.

To lock down your office printers, start by implementing firewalls and using strong passwords. When manufacturers push updates to cover new security risks, download them quickly. Stay current with industry best practices, and make sure your printers are included in your organization’s security policy and procedures.

It’s also critical that you deploy secure pull-printing technology: This allows employees to submit their print jobs to a single secure queue and use their access cards or login credentials to release (pull) their documents from any printer on the network. This simple workflow prevents unauthorized access to sensitive documents and provides the added benefit of reducing waste and resource costs.

Read the full article at Business.com >>

+ 3 Data Security Risks Your Company May Be Overlooking

+ Print as a Service Joins the Great SaaS Expansion

+ Printers must be part of a strong security policy

You probably don’t want to spend your time and energy thinking about print optimization. Focus on what matters most to your business while we work to design a holistic print strategy for your enterprise. You’ll be surprised to see how much more efficient your printing operations can be and how much money you can save your organization every year. Start the conversation today!

You're one step closer to saving your organization a lot of money. Complete this simple form to start the conversation; we will be in touch within a few business days. Thank you!

Start here to make your office printing more secure, efficient, cost-effective, and sustainable.
Request a demo or a free trial of our software.
Prefer to speak to us now? Call 585 939 7000 ext. 2